Discussions about a possible Beverly Hills 9/11 Memorial Garden were initiated in 2009 as Beverly Hills Fire Chief Tim Scranton announced the acquisition of a 30-foot floor beam pulled from the wreckage of the World Trade Center. Soon after, the Beverly Hills 9/11 Memorial Committee, comprised of volunteers, was established to determine how best to utilize the artifact as the centerpiece for a memorial garden. A significant volunteer population, including community and service organizations and individual design professionals and contractors, emerged, and a plan was developed for a memorial garden that would incorporate balance, harmony, flow and a deep respect for the events of 9/11.

The structural steel beam from the Twin Towers (folded in half from the destruction of the day and now standing nearly 18 feet tall) serves as the focal point for the garden space and is encircled by substantial curved granite benches, allowing for contemplation and remembrance. The artifact is surrounded by a raised pentagonal planter with the names of all 2,977 lives lost etched onto stainless steel plaques within the surround of the planter. The garden includes two stone replicas of the Twin Towers and integrates six stone column water features representing life and hope for the future. Adjacent to the monument, a flagpole flies our nation's colors, and a walking path traverses the memorial site. Thoughtful attention was also given to landscaping and lighting for the memorial, ensuring its visibility, day or night. 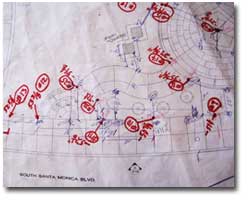 On September 11, 2011, in honor of the 10th anniversary of 9/11 and in a moving tribute to those who lives were lost, Beverly Hills firefighters, police officers, City staff and elected officials and the general public gathered to remember at the unveiling of this stunning garden. The memorial garden serves to honor all those who were lost, those devoted to keeping America safe and those who believe all are created equal and entitled to life, liberty and the pursuit of happiness.

The Beverly Hills 9/11 Memorial Garden provides a sanctuary for those who wish to honor, sit and reflect, contemplate and remember the events of that day. In addition to the imposing Twin Towers floor beam erected at the center of the site, various vignettes have been incorporated to represent the locations of the three plane crash sites – the World Trade Center, the Pentagon and the field in Shanksville, Pennsylvania.